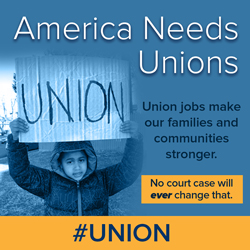 I’m dismayed -- but unfortunately not surprised -- at the Supreme Court 5 - 4 ruling in the Janus case. While the Janus decision applies to public sector unions, this case will undoubtedly be used as a vehicle for a greedy few to begin engaging in institutionalized union-busting in the private sector, undermining the rights of the 14.8 million American workers represented by unions, including 59,000 Alaskans.
It’s worth noting that this decision disproportionately affects women and people of color. Of state and local government workers nationwide covered by protected by collective bargaining agreements, 58 percent are women. One-third are African American, Asian American, Pacific Islander, or Latinx.
As an activist and community organizer, I’ve worked in and alongside union shops and labor organizations for more than two decades. Workers’ rights and civil rights are inextricably tied. Nationwide and here in Alaska, labor organizations have supported domestic partner benefits and marriage equality, and have helped fight discriminatory laws like the so-called “bathroom bill” that Anchorage voters rejected this spring.
There’s an important reason for this. Workers’ rights and LGBTQ rights both boil down to one simple issue: Human rights. The right to fair treatment in the workplace. The right to raise a safe and healthy family. The right to equal representation under the law. It’s unbelievable that these are the rights we’re still fighting to earn and keep in 2018, when these are battles that have been fought and won time and again.
Like many of my fellow Alaskans, at times like this, I often find myself drawing comfort from the Theodore Parker quote made famous by Dr. Martin Luther King Jr.: “The arc of the moral universe is long, but it bends towards justice.” That doesn’t mean we stop fighting and wait for justice to happen. It means that when we are faced with setbacks like today’s Supreme Court decision, we take a moment to mourn and then we get back up, dust ourselves off, and redouble our efforts to help our country live up to its founding principles at every level -- national, state, and local.
###
Do you like this post?
Tweet